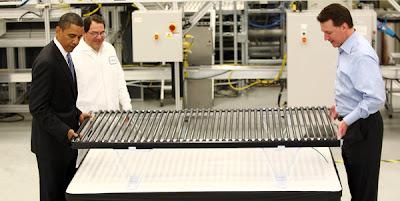 Amusing if it weren't so serious. WLS with the tape. JWF: Axelrod Denies Knowing Obama: 'I Don’t Know Anybody Associated With Solyndra'

Megan McArdle “I’m still trying to wrap my mind around just how much money Solyndra managed to spend in just two short years.”

A lot of money to forget, given the big bucks donors involved.

Remember Axelrod forgetting about the president talking to Blago about the Senate seat? After he spoke about it a few days earlier?

As for Rahm, he's got skills. He's forgotten more about the Obama administration than Obama ever knew.

But Obama does want to stick it to us. He wakes up for that.

P.S. Obama turns into a LaRouchie on trains: WHOEVER’S PROGRAMMING HIS TELEPROMPTER MUST BE A GOP MOLE: L.A. Times: New gaffe: Obama hails America’s historic building of ‘the Intercontinental Railroad’.

More. Watching Solyndra execs take the Fifth in Congressional hearings. They're showing it live on CNBC...I'm switching to c-span. The House stripped DoE funding for greenie projects in their CR....NY Times is a particular laugh this morning:


The government’s backing of Solyndra, which could cost taxpayers more than a half-billion dollars, came as the politically well-connected business began an extensive lobbying campaign that appears to have blinded government officials to the company’s financial condition and the risks of the investment, according to a review of government documents and interviews with administration officials and industry analysts.
While no evidence has emerged that political favoritism played a role in what administration officials assert were merit-based decisions, Solyndra drew plenty of high-level attention. Its lobbyists corresponded frequently and met at least three times with an aide to a top White House official, Valerie B. Jarrett, to push for loans, tax breaks and other government assistance.

Valerie is Obama's leftist brain. They are best buddies. Dead cert he knew what she was up to. So is our President Barack Obama stupid or evil?