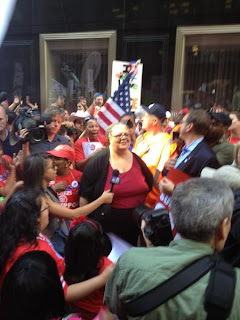 This before pension benefits:  CTU demands huge raise on top of million-dollar pensions

They think she's a rock star.

But then the Chicago teachers union isn't in the business of rewarding merit or used to being evaluated, that's one of the sticking points for them in the few reforms the mayor's proposed. They're used to being given a pass as one big patronage system--vodka in the staffroom coffee pot, hit the streets for their Big Union Big Gov bosses--and they're worried almost 30% of their teachers could be fired if held to reform standards. CTU's not worried about the kids.

Look at this number.

Thankfully some parents have their kids in charter schools or parochial schools, which have a higher success rate and are safer to boot.

In the meantime, Chicago has been taxed to the max, the city is broke, as is the state, which has the worst underfunded pension in the country. We've had a lack of leadership. Rahm is finally showing some. Thank God for that, otherwise we'll end up like Detroit.


As she left the rally, Lewis told the crowd "I've got to go back to the silly part of my day. ... Y'all continue to have fun. Show each other some love."

Vitale later took issue with that, while not mentioning Lewis by name.

"They were told to keep going and have a party and have fun — to have fun while 400,000 kids are out of school that they should have been teaching," Vitale said. "This is not the behavior of a group of people that are serious about the interests of our children. It is time to get serious."

1. STRIKE SPREADS
Lake Forest High School District 115 teachers are striking this morning after contract negotiations failed late last night. The strike is the first in the district's history. The Chicago Tribune has the news.

-- Meanwhile, as Chicago's school strike enters its third day, a New York Times editorial calls the Chicago Teachers Union strike “senseless” and “based on union discontent with sensible policy changes.” As for CTU President Karen Lewis, the paper says she “seems to be basking in the power of having shut down the school system.” Read the editorial here.

-- If you're a parent looking for a place to send your child during the day, Lookingglass Theatre and other groups have set up strike camps and programs. The Chicago Sun-Times has details.
Posted by Anne at 9/12/2012 08:05:00 AM