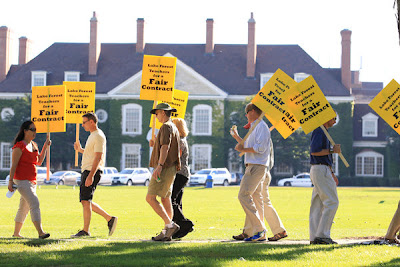 One district asserts its responsibility to children and parents:

"We have a contingency plan and we expect our students to be all in attendance come Monday,” said Golan.
Golan says every year Lake Forest turns away thousands of people who want to teach there.
Lake Forest teachers make an average of $107,000 per year.
Yesterday a group of parents staged a counter-protest demanding that the teachers return to work.


Michael Hernandez, an attorney negotiating for the district, presented information on salary scales and benefits on a big screen. He described the union as being unreasonable during a time when the community has been “affected by foreclosures by people who lost their jobs.”
He criticized the union’s calculations on the district’s future reserves, saying, “We see these projections and don’t know where they came from.”


Lake Forest High School teachers are on strike less than a month after an impasse was publicly declared for contract negotiations. [snip]

In a statement issued on behalf of the administration by spokeswoman Anne Whipple, District 115 contends the teachers’ salary demands are unreasonable in a shaky economy.
“The teachers received no increase in compensation for the last school year,” the statement says. “That freeze, however, followed a five-year period over which salaries increased — in unprecedented financial times — by an average of 5.5 percent annually, elevating our salary schedule to one of the highest in the state.”
Documents show a teacher on the low end of the current salary scale would receive $50,116 and $127,649 on the high side for the 2012-13 school year. Lake Forest High placed No. 18 on the latest salary ranking complied by the Illinois State Board of Education.
Gress contends that based on student test scores, Lake Forest teacher salaries should be higher and compete with those paid at high schools such as Stevenson in Lincolnshire. Documents filed by the Lake Forest teachers union show total average pay raises this year will be 4.53 percent at Stevenson District 125.

You want to compete, teach? See if anyone else will hire you when you get fired.

...How touching teachers are concerned that the district remain competitive, as they walk out on the kids, who compete every day, whether it be sports or academics.
Posted by Anne at 9/13/2012 09:18:00 AM