Kids are the casualties

Teacher/parent refers to own schoolkids as "casualties" of the battlechicagotribune.com/news/local/bre…

It's no wonder we have cowards and killings in this town with a CTU culture like this.

That is what I said

When the CTU shut down the schools did they care about the kids. Did they put them first? Be honest, now.

No, a thousand times no

As they marched in the streets of Chicago, blocking buses

Blocking opportunity for these kids, not giving them the best teaching

George Wallace couldn't have done better to deny these kids their best chance.

I said that too.

***
CPS deal up in air as talks extend into early morning


It is about two concepts that every professional in the workplace understands.
The first is that if your boss is held accountable for the performance of the team, the boss gets to decide who to hire. Second, and most important, your job review is based on how well you do your job.

These sound like common-sense principles but are anathema to many teacher unions, particularly the CTU. It not only wants to block meaningful assessments of teacher performance but also wants to dictate to principals which teachers they can hire.
The union's position basically amounts to this: All teachers teach equally. And if some appear not to be doing their job, it is the fault of their students or the students' home environment or school administrators. Therefore pay and job security should be based on longevity, with tenure protections so ominous that termination of even the worst teachers is too burdensome to even attempt. This is the mentality that brought us the infamous New York City "rubber rooms" for teachers who were accused of wrongdoing but could not be fired.

***
One of every two children fail to graduate in Chicago Public Schools.

***
Talkers and Do-ers: My exchange with a Lawyer and Karen Lewis a Be-smears Philanthropist 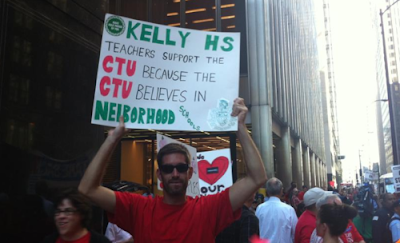