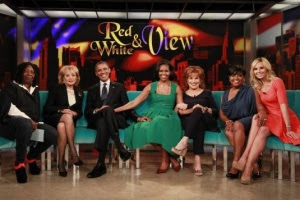 Crossing his legs with the best of them on The View while stiffing key world leaders, then making a pathetic UN speech. Are we so sick of his stunts yet or what. Andrew Malcolm has a whole slew, a few new to me:


Last night a United Nations soiree with wife Michelle. Rest. And today, Obama will address the U.N. General Assembly before fleeing back to Washington without holding one bilateral meeting with any world leaders. Last year he had 13 consultations on the annual UN trip.
The Democrat's poor political optics are legion. At one White House youth day Obama showed off his own moves on the basketball court instead of coaching the visiting youngsters. He spent Earth Day last year creating an immense carbon footprint flying his 747 jumbo jet coast-to-coast after draining more cash from California donors.
He took a 17-vehicle motorcade of SUVs for a photo op admiring an electric car. When an unemployed audience member complained about Obama's strict gas mileage regulations, the president suggested the man buy a new car.

And how can we forget his patronizing lecture to Univision on the three branches of government, in response to tough questions, his outright lies about Fast and Furious.

We know most of the press protects him. Actually, we know they advocate for him, worse than it's ever been.

I hope for the country's sake most Americans can see through him.


The murder of Ambassador Stevens may well have been the most horrific killing in our nation’s diplomatic history. The administration’s original narrative — that the ambassador got separated from his security detail, suffocated amid the smoke, and was found unconscious by well-meaning Libyans who, in concern, rushed him to the hospital — cannot be true. Some disturbing rumors and evidence later emerged to the effect that Stevens may have had no real security detail to speak of, but was helped only by the brave ad hoc service of some private security contractors, who gave their lives to save an American diplomat without military support. More disturbing even than the absence of adequate military security was the likelihood that Stevens was attacked viciously by the mob, perhaps sexually brutalized by it, and then taunted by his killers, before being dumped in the street. In the long history of attacks on our embassies, I cannot think of a comparable instance where an ambassador was caught alone, mobbed, tortured, and photographed in extremis — or where an administration was so averse to disclosing any details of his demise.