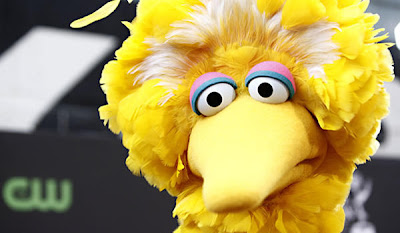 Clearly Sesame St. has not worked to teach Rep. Jan Schakowsky to count #MathIsHard so let's school her as she rallies for PBS, planning to attack GOP Veep candidate Rep. Paul Ryan today in the Chicago suburbs.

Why should our kids fall down a debt hole to China to fund Big Bird and his ilk.

PBS/NPR supporters are mostly old and rich so pony up, Jan.


Public media supporters claim that $1.39 per taxpayer isn’t that big of a burden, but that argument cuts both ways. If they really feel it isn’t such a huge expense, then certainly we can find other sources to cover that $1.39. That’s seems particularly true given their audience demographics: NPR’s average listener is old (median age of 50), rich (median household income of about $86,000 compared to the national average of about $55,000), and more highly-educated than the average American. Some of the largest foundations and Fortune 500 companies are also major NPR and PBS supporters.

Time for Big Bird to get out of your parents' basement.


Romney’s not out to drive Big Bird off the air. He just doesn’t think that he rates a Washington subsidy — and he’s not alone.
President Obama’s own Simpson-Bowles deficit-reduction commission calls for ending PBS’ subsidy — some $280 million — outright. And for good reason.