Jobs for Votes Culture & the 47% Solution 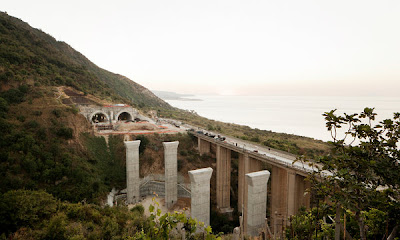 
This morning's Times slams the "jobs-for-votes culture" in southern Italy which has "defrauded" the state and harmed the locals, although the same paper can't see any harm in "Obama" phones or timely UAW bailouts.   Fortunately for the Times, their readers can't see a connection either.

At first glance you might think it was an ancient Roman ruin. But no. NY Times: Corruption Is Seen as a Drain on Italy’s South:


REGGIO CALABRIA, Italy — Italy’s A3 highway, begun in the 1960s and still not finished, starts outside Naples in the ancient hill town of Salerno and ends, rather unceremoniously, 300 miles farther south as a local street in downtown Reggio Calabria.

Along the way, it frequently narrows to two lanes, with an obstacle course of construction sites that have lingered for decades. Perilous, two-lane bridges span mountain ravines high above the sea, while unlit tunnels leak in the rain — and occasionally drop concrete and other building materials onto passing cars.

In the States you can find corruption on a massive scale in a city like Detroit, or in Chicago, Illinois.

The highway is also a symbol of what some Northern European countries say they fear the most about the euro zone: its development into a welfare system in which they are expected to support a sluggish Southern Europe, where grants and subsidies too often vanish in graft that the governments appear unable — or unwilling — to prevent. And it helps illustrate how the financing has yielded relatively little of the productive investment that might now be helping Southern Europe as it tries to climb out of an economic ditch. In Italy, misuse of European money “did tremendous damage because the funds were used badly and, as some magistrates say, they also fed organized crime,” said Sergio Rizzo, a co-author of best-selling books about political corruption.

Feeding crime, little productive investment, a bleak future. In the US we're close to the tipping point that's dragged Europe down years ago. What of our future. Arthur Brooks, WSJ:


A good way to measure entrepreneurship among the economically vulnerable is by studying the percentage of laid-off workers seeking to start businesses. According to economist Scott Shane of Case Western Reserve University, the percentage of job-seeking business starters fell to 4% from 11% between 2007 and 2010. This is no surprise, given the labyrinthine regulatory and licensing complexity facing small business and the specter of exploding tax rates.
Politicians' corporate cronies may be able to navigate the policy uncertainty of Obamanomics, but the little guy hardly has a chance. Mr. Romney should remind voters that in today's anti-poor policy environment, their immigrant ancestors might well have chosen to stay home.

This is still a country of dreams rooted in family and earned success. We owe it to those who came before us and those we raise today to fight for an America of honest opportunity.

More.   Battleground Poll: Romney Up 16 with Independents, Up 13 In Enthusiasm