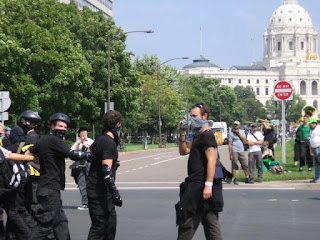 Yes, there have been protests in Minneapolis-St. Paul. I haven't seen too many where I've been, as I have mostly been inside the convention center blogging and tracking down people. But as Kim Pearson noted on Monday I did tangentially observe a few demonstrators here and there. Initial reports were of not much other than peaceful demonstrations, which we can all appreciate. Since then, though, there have been reports on the local news and in the local papers of concrete blocks being thrown off interstate bridges to hit delegate buses. This morning at the RedState/Google bloggers breakfast I ran into Lady Logician, a local who blogs for True North. Here's a video of that. As many of you know, that could kill. Any time you drop something heavy off a height it has murderous force.

That said, let us give each side some slack. As Lady Logician pointed out to me this morning, which tracks our experience of most demonstrations, there is a majority segment of peaceful demonstrators, and a small group of anarchists, etc. bent on violence and destruction. Any group that hides their faces is not primed to be neighborly. As far as the police go, they are trying to keep the peace. They are trying to let people exercise their right of free speech while not endangering the civil liberties of others. The reports of bleach being thrown by protesters on the Connecticut delegation, which I saw on the news this morning, and which Lady Logician confirms, are no joke. This included a woman in her 80's who had to be rescued by a hazmat team.

I asked Lady L why we saw more of this in St. Paul than in Denver. She said she thought the main reason was that in Denver the protesters were purposely kept further from the convention center--(I would add it was a decision by the city of Denver, led by a Democrat mayor). Lady L pointed out that the mayor of St. Paul, also a Democrat, wanted to accommodate the protesters.

And this is the very mixed result. It's called democracy.