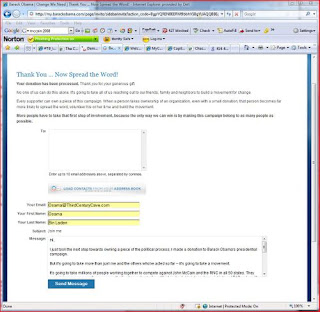 I don't listen to the radio much these days, but at one time the traffic guys would have a cute Chicago handle, like Dan Ryan (expressway). How about Howard EL? Every once in a while the EL train would be delayed. How about a more highbrow Hyde Park? Using an all in the family name.

So perhaps we shouldn't be surprised at the latest antics, though hardly cute, of the Obama campaign, which, after all, hails from Chicago.

We have Ben Dover (oops, that was the other fraud). Mr. Good Will. Today we meet John Galt. Oh, and these guys: Bart Simpson, Family Guy, Daffy Duck, King Kong, O.J. Simpson, and Raela Odinga.

How about Dee Liberate?

Should we fill in the blank with Barry O'Bama? Wonder if they would accept a donation from Bill Ayers (apparently so!!) or Tony Rezko? How about Fannie Mae? Freddie Mack?(Oh, yeah they donated already.) Who else? !!!

Maybe Barry Obamski. Stealing the election by hook or by crook.

Obama’s campaign shrugged when legal doubts were raised about the sloppy voter registration practices of ACORN — an organization that Obama himself has both helped and praised.

Yet Obama once was a stickler for proper voter documents. In 1996, he had all of his Democratic rivals removed from the ballot in an Illinois state primary election on the basis of sloppy voter petitions.

Yes. Not to mention being a prize jerk, going after people from his own party in this way. Barack Obama went to Harvard Law School. This is deliberate fraud--and if he claims he didn't know about it, what does that say about his judgment in choosing his campaign people--and how could we ever trust this guy to run the country.