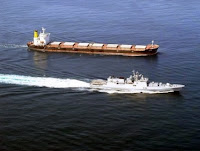 I heard this on WFMT this morning, (I guess even they were impressed--maybe they thought it was Gilbert & Sullivan or something.) The Indian Navy takes on the pirates!! (Earlier photo of the warship escorting a merchant vessel.) London Times:

An Indian navy warship has sunk a Somali pirate "mother ship" in the Gulf of Aden, the world's most treacherous waterway, after the renegades threatened to attack the frigate.

The clash happened as pirates claimed to begin negotiations over a ransom for the Saudi super-tanker that was seized nearby on Saturday with two Britons aboard. The Sirius Star, which is carrying at least $100 million worth of oil, is the biggest ship ever to be hijacked.

"On repeated calls, the vessel's threatening response was that she would blow up the naval warship," the Indian Navy said in a statement.

"INS Tabar retaliated in self defence and opened fire on the mother vessel.

"As a result of the firing by INS Tabar, fire broke out on the vessel and explosions were heard, possibly due to exploding ammunition that was stored on the vessel."

“From what we see in photographs the pirate vessel is completely destroyed,” a senior officer said. Two speedboats were seen fleeing the sinking ship.

The British also turned captured pirates over in Kenya for charges after foiling an attempted hijacking.

UPDATE: WSJ on confronting the pirates:

As Somalia falls apart and the pirates proliferate, it's been left to the U.S. and the rest of the civilized world to police them. The main vehicle for doing so is a global maritime effort called Combined Task Force 150. It was set up after 9/11 by the Bush Administration and falls under the aegis of the U.S. Navy's Fifth Fleet. Commanders have hailed from France, Britain, the Netherlands, Canada and Pakistan. The current commander is a Commodore of the Danish Royal Navy.

But CTF 150 has 2.5 million square miles to patrol. Fighting piracy poses knotty legal problems too, as David Rivkin and Lee Casey describe here, not least what to do with captured pirates. Build a Captain Jack Sparrow wing at Guantanamo to contain them?