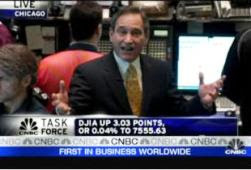 Rick Santelli, American HERO!! Santelli tells it like it is on the floor of the Chicago Board of Trade, live on CNBC this morning. Here's the tape. Recap here by World Net Daily:

"We're thinking of having a Chicago Tea Party in July," Santelli told CNBC "Squawk Box" co-anchor Joe Kernan. "All you capitalists who want to show up at Lake Michigan, I'm going to start organizing."

More: Rush mentioned this this morning--students at Mesa, Arizona listening to the president question his plan. Kind of a bad example for our youth, isn't it Mr. President--why work hard--why study, why save? The government will bail you out...or take away what you have. The porkapalooza is a tax anything that moves. Next anti-porkulus rally--Kansas. Nothing the matter with Kansas.

UPDATE: Are you listening President Obama?!!! The Chicago Tea Party I hear will be on tax day, April 15th, a march downtown. Will confirm, folks, when I get more details.