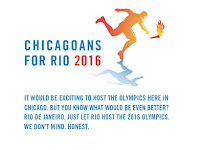 The lefties at The Nation:

the very idea that Chicago could be the setting for the Olympics could have been hatched by Jon Stewart for a four-year supply of comedic fodder. To greater or lesser degrees, the Olympics bring gentrification, graft and police violence wherever they nest. Even without the Olympic Games, Chicago has been ground zero in the past decade for the destruction of public housing (gentrification), political corruption (it ain't just Blagojevich; I can't remember the last Illinois governor who didn't end up behind bars) and police violence (the death row torture scandals). Bringing the Olympics to this town would be like sending a gift basket filled with bottles of Jim Beam to the Betty Ford Clinic: overconsumption followed by disaster.

It's also difficult for Chicago residents to see how this will help their pocketbooks, given that Daley pledged to the International Olympic Committee that any cost overruns would be covered by taxpayers.

This is why a staggering 84 percent of the city opposes bringing the Games to Chicago.