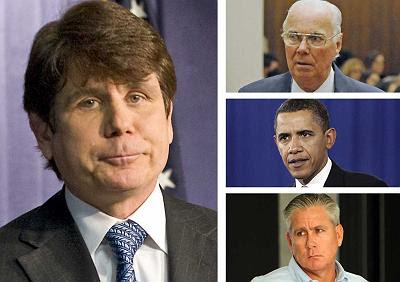 UPDATE: Is there nothing Obama can't do? small dead animals with the recovery.gov big bucks spent for a few jobs--featuring Illinois in the graphic.***Chicago Sun Times: Inside Rod Blagojevich's jobs machine
SPECIAL REPORT | Declaring a hiring freeze while doling out jobs based on clout, former governor carried on business as usual from day 1 of his term, files reveal

More:5 hired after Obama vouched for them
Rahm Emanuel, Hillary Clinton also listed as job sponsors, but no one landed all their candidates on payroll

Illinois lawmakers are dead serious about reform -- as long as it doesn't crimp their style. The two big measures moving this week are all about protecting incumbents and their bosses.