This is the most incisive piece I have read on the subject. James V. DeLong, Pajamas Media:

The frenetic hostility to Sarah Palin, even by many on the Republican side, is unnerving, because her qualifications to be president are objectively better than those of almost anyone who has been on the national ticket over the past decade.

A reasonable conclusion is that these qualifications are precisely the cause of the hostility. To admit to the reality that the dominant political class, including the MSM and the punditocracy of both parties, has been giving us abysmal presidential candidates, to accept that a hockey mom plucked from small-town Alaska is better than the best that the political class can come up with, would require recognition of the terrible truth that the system has become deeply dysfunctional. Doing this would force our political elites to look into an abyss of serious questions about the functioning of our democracy. Palin creates a cognitive dissonance so intense that it simply cannot be accepted.

Sarah is back, unfiltered. 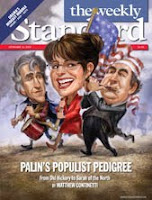 She's worked hard her whole life, worked her way up, and she knows what works. She's strong and she has rock-solid integrity. Unlike many of her critics.

P.S. Matthew Continetti, TWS, The Palin Persuasion: A case for the new populism:

In a 1978 radio commentary that he wrote while overlooking traffic from a hotel room window, Reagan distilled the populist belief in individual ability. "They are not 'the masses,' or as the elitists would have it, 'the common man,' " Reagan said of the people driving cars on the highway below. "They are very uncommon. Individuals, each with his or her own hopes and dreams, plans and problems, and the kind of quiet courage that makes this whole country run better than just about any other place on earth." Reagan's mission was to remove the obstacles that prevented these men and women with "quiet courage" from realizing their potential.

Time for a cup of tea.