When States Default. Illinois Gets the Fisheye 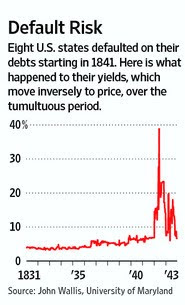 At least more than a century ago they were building infrastructure. What have we to show for it? Public union workers themselves should be outraged, as their union bosses have used their dues for political activity, leaving many of their pensions bankrupt. So sorry, you can't retire at 50, there's no money.

In an internal memorandum, the A.F.L.-C.I.O. warned that in 16 states, Republican lawmakers would seek to starve public sector unions of money by requiring each government worker to “opt in” before that person’s dues money could be used for political activities.

“In the long run, if these measures deprive unions of resources, it will cut them off at their knees. They’ll melt away,” said Charles E. Wilson, a law professor at Ohio State University.

Of all the new governors, John Kasich, Republican of Ohio, appears to be planning the most comprehensive assault against unions. He is proposing to take away the right of 14,000 state-financed child care and home care workers to unionize. He also wants to ban strikes by teachers, much the way some states bar strikes by the police and firefighters.

“If they want to strike, they should be fired,” Mr. Kasich said in a speech. “They’ve got good jobs, they’ve got high pay, they get good benefits, a great retirement. What are they striking for?

These days the two types of worker inhabit two very different worlds. In the private sector, union workers increasingly pay for more of their own health care, and they have defined contribution pension plans such as 401(k)s. In this they have something fundamental in common even with the fat cats on Wall Street: Both need their companies to succeed.

By contrast, government unions use their political clout to elect those who set their pay: the politicians. In exchange, these unions are rewarded with contracts whose pension and health-care provisions now threaten many municipalities and states with bankruptcy.

The reckoning is here...

The worst financial crisis since the Great Depression and politicians’ unwillingness to cut budgets explain the descent since 2008, said Tom Johnson, president of the nonpartisan Taxpayers’ Federation of Illinois. Annual sales and income-tax revenue fell for the first time in modern history, he said.

“The state was hoping for a quick recovery or inflation, and they didn’t get it,” Johnson said in a telephone interview. “And there was no appetite to reduce the escalating costs of spending.” 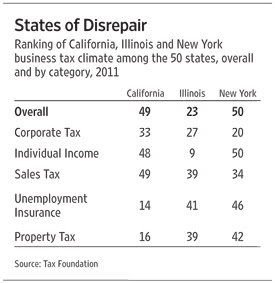 A snapshot of the wholly-owned Dem states--oh yeah, leftist nirvana.

It's no accident that all three are also the very model of modern welfare and regulatory states. Their capitals have been dominated by a triumvirate of government-employee unions, trial lawyers and well-to-do environmentalists pushing an agenda of regulation and income redistribution.

These are parasites sucking the life out of us.

Mr. Quinn's plan would cost the average middle class family about $800 a year more in taxes, on top of sky-high property tax levies.

Mr. Quinn is also proposing to raise $15 billion in new revenue bonds, though the state already has some $100 billion in unfunded pension and health-care liabilities. Government workers pay nothing for health-care benefits and many can retire as early as 50 or 55 with a pension that pays 80% of the average salary of their final four working years.

Many of these "retirees" could receive pensions for more years than they worked, even as they are young enough to take another job. The new bond plan requires a supermajority vote of the legislature, and Republicans should at least insist that the plan not pass in a lame duck and include major pension reforms

Fight for your lives, folks.

P.S. WSJ letter to the editor: Why Have White-Collar Unions?

Regarding the letter from Linda Hamilton, president of the Minnesota Nurses Association (Dec. 20): I never fail to be baffled about why a group of individuals who have college degrees need collective bargaining. They aren't high school dropouts working in sweat shops, they are white-collar professionals. Yet for some reason they are incapable of figuring out their own retirement plan, or negotiating a salary like the rest of us rubes out here in the private sector. Please. They are perfectly capable and the need for unionization of degreed professionals such as nurses, teachers, police, firefighters, etc., is nil. The folks who really foot the bill, the taxpayers, are awakening to this fact—one that is terribly frightening to those who work in collective bargaining. The tone of Ms. Hamilton's letter speaks volumes.