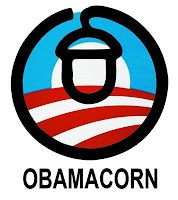 ACORN is facing an investigation by the FBI and an Ohio group has filed a RICO lawsuit--how appropriate, ACORN, alleged a criminal enterprise and Barack Obama early on allied himself with this group in Chicago--the hometown of mobster Al Capone. In Ohio there is evidence of coordinated voter registration efforts between ACORN and the Obama campaign. There are reports in Nevada that convicted felons skilled in identity theft are running ACORN operations there. Now we have evidence of identity theft and credit card fraud related to Obama campaign contributions. ACORN's claims of innocence ring hollow, as at least one phony voter has been caught casting a vote. Breaking--an Obama plumber operation in Boston?!!! Is the cover-up starting? What do you know Barack Obama?

"So, you know I have fun with the media. We all know that the press is really an independent, civic-minded and non-partisan group … like ACORN.

"In case you haven't been following my opponent's 'Get Out The Vote' campaign, ACORN is helping to register groups that were previously excluded, overlooked and under-served – second-graders, the deceased, Disney characters."