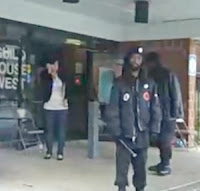 Remember? They were on tape. This Ain't Hell with an update.

Of course if ACORN gets to register phony voters and mess with the census they won't need this kind of open thuggery next time.

P.S. The census asks people if they have trouble making decisions. Any bets on those folks being targeted for their vote. And swelling the numbers for redistricting is the ultimate prize. Let's not forget ACORN has hired people convicted of identity theft. Beat you up or beat you up.

Career lawyers pursued the case for months, including obtaining an affidavit from a prominent 1960s civil rights activist who witnessed the confrontation and described it as "the most blatant form of voter intimidation" that he had seen, even during the voting rights crisis in Mississippi a half-century ago.

The lawyers also had ascertained that one of the three men had gained access to the polling place by securing a credential as a Democratic poll watcher, according to interviews and documents reviewed by The Washington Times.

Are you a coward Eric Holder? Are you politicizing the Justice Dept.?

More New Black Panther party news: Their endorsement of Barack Obama was on the Obama campaign website for some time. And presumably the same Malik Zulu Shabazz, resident of D.C. who was intimidating people at the Philly polling place was vocal elsewhere:

Malik Zulu Shabazz. In his own words, according to the ADL…

And what about this? Who paid for Barack Obama's Harvard Law School?

Imagine if Ku Klux Klan members had stood menacingly in military uniforms, with nightsticks, in front of a polling place. Add to it that they had hurled racial threats and insults at voters who tried to enter.

Now suppose that the government, backed by a nationally televised video of the event, had won a court case against the Klansmen except for the perfunctory filing of a single, simple document - but that an incoming Republican administration had moved to voluntarily dismiss the already-won case.

Surely that would have been front-page news, with a number of firings at the Justice Department. [snip]

We asked the Justice Department if it was unable to provide any explanation for dropping the case. Justice press aide Alejandro Miyar merely said: "That is correct." Multiple times we asked both the department and the White House to comment on charges that the dismissals represented political bias. We received no substantive response.