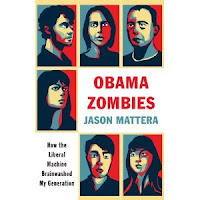 The MSM routinely withholds the truth--and gives a pass to a 9/11 truther.

Come on millennials--wake up. Zombie no more. As for the MSM, is there hope?

P.S. Maybe Jones is writing a book over at the center. Wonder who Barack sneaked out to meet?:)

Related book posts: Bill Ayers No Dream, The Core of Barack Obama, Our So Presidential Author, Barnes and Not So Noble Barack, Barack Obama, America's Author in Chief

The Obama Zombie Influenza or "OZ-1 Virus" is a contagious mental disorder caused by exposure to liberal/socialist doctrine. Recently, the OZ-1 virus has been as devastating to American minds as smallpox was to the Native American population. The OZ-1 Virus has created legions of the brain dead, infecting both young and old, man or woman, and plebian or celebrity. Every person is susceptible to the virus since the entire population experiences varying levels of exposure to this ideology due to the distribution of these pathogens by the mainstream media; however infection spreads rapidly through liberal breeding grounds such as college campuses and Northeastern cities. Direct contact does not necessarily cause infections, individuals that are well educated on the founding principles of America, fundamentals of the free market, and fiscal/behavioral responsibilities are easily able to fight off infection. Due to similar symptoms, the OZ-1 virus is often misdiagnosed as dementia or mental retardation during the early stages of an infection. Containment and treatment of this virus has become tricky since rapid culling of all infected or exposed individuals has been deemed to be an "unethical" first line of defense.

check it out at http://www.donationruse.com/ObamaZombie.html