The Next Congressional Generation: The Brave and Exceptional 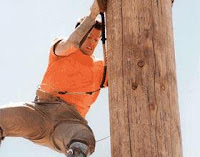 This fall, throw out the aging tax and spend hippies!:) and the last of the country club Republican appropriators. Matthew Continetti giving Illinois challenger Adam Kinzinger (and local hero) a mention, as well as Wisconsin's Sean Duffy, the former lumberjack and DA who scared old Dem dragon Obey out of the race:

The next generation of congressmen is anti-bailout and anti-D.C. They are terrified of the debt America has accumulated over the last two years. They are willing to consider radical solutions like Paul Ryan’s “Roadmap for America’s Future.” “I have a fear of creeping government influence, creeping socialism into our lives,” says Sean Duffy. “And I think it’s one of the battles of my generation. It’s sad that we have to re-fight this battle. But it’s coming back with a vengeance.”

I was a Senate intern the summer Nixon resigned, and left D.C. the same day he did. At the time I was a Democrat, but after suffering through Jimmy Carter's misery at home (there was an index, inflation plus unemployment in the double digits) and ignominy abroad (the Iran hostage crisis) I voted GOP for Reagan and never looked back.

I think we've had a similar shock under this rigid and ruinous president. Let's hope something good will come of it--a generational shift that will lead us to cut spending, tackle entitlements, get out of the way of our vibrant economy that will create the jobs of the future, and secure our liberty at home and abroad.

To accomplish that we need to be the land of the free and the home of the brave. And elect them.