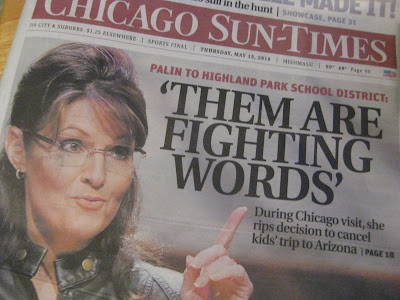 Sarah Palin took suburban Chicago Rosemont by storm in her speech last night and directly challenged the suburban Chicago Highland Park High School decision to ban their championship girls basketball team from playing at a tournament in Arizona. Palin: “Keeping the girl’s basketball team off the court for political reasons? Those are fighting words,”. Sun Times front page Palin: "Them are fighting words". [Just to clarify, since I heard talk on the air about bad grammar--My dad, who was an English major, and graduate of Columbia's J school, used the expression, Them's fightin' words. It's a gem of a colloquialism that goes back to early Yankee days at least and has found its place in American literature. He also used to say--how do you like them apples:)] The Tribune story calls Palin a conservative "firebrand". Hmm, who's afraid of strong women? Palin points out the school is OK with sending students to the People's Republic of China, (which treats girls as second class citizens and one-child abortion policies have resulted in millions of girls missing). And does Asst. Supt. Suzan Hebson know that people doing the meditative exercise Falun Gong are imprisoned and tortured?

The Sun Times story claims conservative talk radio has targeted the suburb on this issue--well, I first read about in the Chicago Tribune--I live a couple suburbs down, and parents are understandably upset about canceling kids' opportunities for politics.

Mayor Belsky of Highland Park calls in to Don and Roma's WLS radio show this morning complaining about all the supposed dittohead emails he's getting but tonelessly intones repeatedly that he knows nothing about it, it wasn't his decision. Roma asked what if it had been a boy's team. A very good question. He had no good answer to that either. [Podcast here now]

A Highland Park parent will be on after the 7:30 break.

...The parent is on now. The girls raised all the money for the trip themselves. The decision to cancel was made without any discussion....The administrator who talked to the parent said they were worried about a possible arrest. The parent points out the trip is not mandatory--if anyone is worried they can opt out. The administrator said it wouldn't be fair to the individual so the whole team shouldn't go. The parent pointed out the school just approved trips to Budapest, Paris and if someone didn't have a passport they couldn't go either, how fair is that? The parent says the Supt. should reverse the Asst. Supt.'s decision--it would be a teachable moment.

...The parent had initiated this a year ago as a wonderful opportunity and memory for his daughter. His son had enjoyed a similar trip with his baseball team.

Related. Most support Arizona. NBC, WSJ poll. Newbusters looks at the media portrayal of the poll.

More. Don and Roma checked the transcript of the Rush Limbaugh show and Rush did not tell people to email the mayor of Highland Park as he claimed. Get the facts, mayor, get the facts.

...Replay of the interview with the mayor--I had just caught the last part. Apparently Highland Park had a boys soccer team trip to Brazil (pretty high crime there). And as Roma points out there have been these horrific school stabbings in China in the news lately.

More. Tribune editorial on the Highland Park HS snafu. OK, I agree with this part (they must read the blog):

Safety concerns? School officials won't elaborate, but they must be entertaining some Wild West shoot'em-up stereotype. Let's pretend some overzealous Arizona cop imagined or invented probable cause to demand to see the documents of a chaperoned clutch of teenage hoopsters. That would be outrageous, but not dangerous.

As for values, well, whose call is that? [snip]

And we would have respected parents' right to make a decision on behalf of their kids. We don't support school officials substituting their own judgment, especially without input from players, parents or the district at large. The administrators are making this statement, but the kids are making the sacrifice. That's wrong.

Can we actually look at the law and the history? And I would say the boycott hurts hotel and other workers in the state. As for other sports boycotts, puhleeze--how about just make all your games free--wouldn't that be the fairest, non-discriminatory action?

...Are borders racist? Is locking your door racist? Are setting school boundaries and denying entry to schools racist?
...And think about this. Are we perpetuating injustice? Must I quote MLK again? Something about the content of our character?
Posted by Anne at 5/13/2010 07:13:00 AM