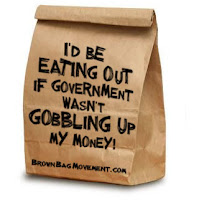 I wondered if they were talking about Paul Ryan or Sean Duffy, but this time it's Scott Walker:

Making political hay out of the lunch that he packs for himself, Walker has branded his events around the state as part of a "Brown Bag Movement" that has three tenets: (1) "don't spend more than you have"; (2) "smaller government is better government"; and (3) "people create jobs, not government."

Walker's movement has a website that includes images of brown paper bags with pointed messages on them such as, "I'd be eating out if the government wasn't gobbling up all my money." Another message is, "We spent $780 billion on a stimulus plan and all I got was this brown bag."

The Dems haven't called him a teabagger yet.

Walker turned around Milwaukee County. We should be so lucky in Cook County.

We could be that lucky in Cook County if Roger Keats is elected!