The Racist Roots of Gun Control 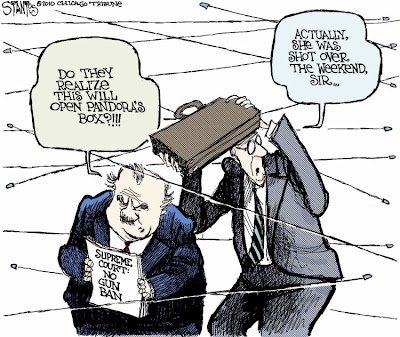 In case you didn't know.

Ironic as well that Justice Thomas, having survived his own “high-tech lynching,” wrote an impassioned concurrence and that his vote was, in essence, the only vote that mattered.

Thank you and God Bless you Otis McDonald.

More. Tribune (the mayor thinks the Supreme Court is out of touch):

But for Otis McDonald, who took on the city and won, the ruling was as much about correcting misdeeds done to his African-American ancestors as giving law-abiding residents the right to have guns at home to protect themselves from violent crime.

"I was fed up with drug dealers and gang-bangers messing with my home, my property and eventually threatening my life, and somebody saying that all we needed was to get guns out of the houses," said the 71-year-old McDonald, who was at the Supreme Court when the ruling was issued.

"I couldn't take that anymore. I knew I had to look somewhere and find somebody to do something about this. It was all designed by a great power. … It was all for a reason."

On his journey through the legal process, McDonald said he came to understand more about his history and the "slave codes" enacted in Southern states during the Civil War that prohibited slaves from owning guns. After slavery was abolished, states adopted "black codes" that applied to freed blacks.

"There was a wrong done a long time ago that dates back to slavery time," said McDonald. "I could feel the spirit of those people running through me as I sat in the Supreme Court."

More. Leftist justices don't accord the 2nd amendment validity in the Bill of Rights. WSJ:Five Gun Salute. The High Court's four liberals are holding out to overturn Heller:

Justice Stephen Breyer, joined by Sonia Sotomayor and Ruth Bader Ginsburg, even did a rare turn as a states' rights advocate, noting that incorporation will curtail the ability of states to craft their own gun laws. This problem doesn't seem to bother Justice Breyer or the other liberals when they overturn state laws based on a "right to privacy" that, unlike the Second Amendment, is mentioned nowhere in the text of the Constitution.