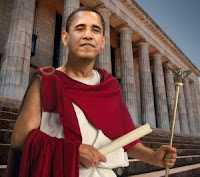 Look around the world:

Italy’s debt now stands at 120 per cent of GDP, equivalent to Greece’s debt. The country must soon choose between its welfare commitments and its interest payments. The two professors say it can’t afford both. [snip]

Democracies have made people more dependent on the state than any humanitarian necessity required. For Italy, and for other democracies, the worst is surely yet to come. Already, hundreds of thousands of middle-class people have thronged the streets of Paris and Rome, of Milan and Sarajevo, of Reykjavik and Bucharest (where demonstrators stormed the presidential palace, an insurgent act that evokes the spectre of revolution).

Look around the country:

And Mr. Obama continued to blame all his -- and our -- problems on the mess he inherited two years ago.

Change? While the president did not mention Mr. Reid's front-running Republican challenger Sharron Angle by name, he did comment on her plan to let younger workers invest part of their Social Security withholdings in private accounts they would own, while Washington would continue paying promised benefits to older Americans:

"On a lot of these issues, she favors an approach that's even more extreme than the Republicans in Washington," said the "post-partisan" president, drawing laughter from the hand-picked, closed-door Democratic crowd. "That's saying something. That is saying something. I mean, she wants to phase out and privatize Social Security and Medicare."

Whereupon the president proceeded to set out his own detailed plan -- and Sen. Reid's -- to save a Social Security and Medicare entitlement system that's already spent all the money current retirees ever paid in, and which is thus headed for bankruptcy.

Well, no, of course he didn't do that.

Mr. President. We don't believe you. We don't trust you. Dulcet tones and sweet promises on the campaign trail, rehashed, don't cut it.

We want our country back.

More. A Piece of Advice for the NAACP. Deroy Murdock, NRO:

We want our country back...yes we do!!