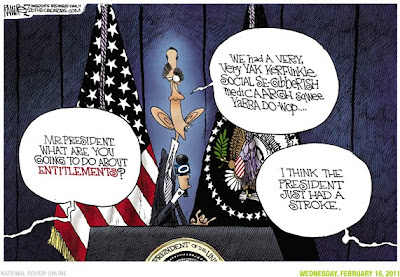 Yes, we may well wonder. But let's be charitable, perhaps he's speaking Austrian in the 57th state.
Look, he's not a centrist, never has been, he's not a leader, never has been, he's just a pose and a leftist agenda.
Cartoon by Michael Ramirez, IBD
P.S. Who's got the fierce urgency of now. TEA Party Nation on offense--this is serious. We the people are serious: The GOP is all-in on entitlement reform. Score another victory for the Tea Party. NRO.

“With the president abdicating, we’ll take the mantle,” says another aide, in a frequent refrain. “This isn’t a schoolyard, this isn’t recess, this isn’t the Illinois Senate; this game of chicken is irresponsible.”