Where the jobs are. NOT 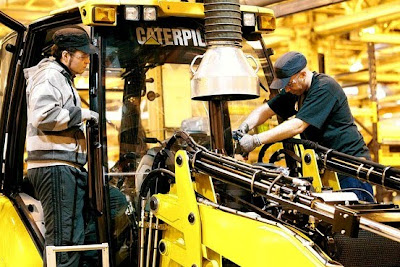 A decade ago, Mr. Slaughter, who consults for several big companies and trade associations, drew attention with his observation that "for every one job that U.S. multinationals created abroad...they created nearly two U.S. jobs in their [U.S.-based] parents." That was true in the 1990s, he says. It is no longer.

The Commerce Department's summary of its latest annual survey shows that in 2009, a recession year in which multinationals' sales and capital spending fell, the companies cut 1.2 million, or 5.3%, of their workers in the U.S. and 100,000, or 1.5%, of those abroad.

Illinois is warned on taxes, the U.S. on its debt load. Duh.
It's not an eeeevil conspiracy by corporations it's a response to political interference, uncertainty in the market and high taxes. Then there's going where there's growth in demand. Unlike government, corporations have a responsibility to their shareholders to make a profit. You know, shareholders like widows and orphans who invest their savings and may rely on dividends for their living/retirement.

Meanwhile, our President Barack Obama, fresh from meeting with blood libel Al Sharpton and trashing responsible GOP budget proposals, ignores the S&P warning and touts...what. Immigration. One of Americans' last priorities in this jobless, sluggish recovery.
Shoring up his base is this president's only job in his view.
P.S. Heritage on the same page.
Posted by Anne at 4/19/2011 10:35:00 AM