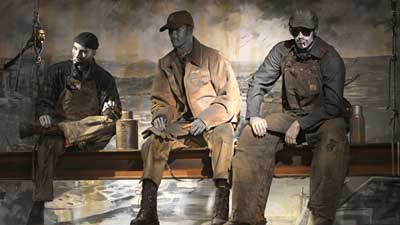 Now that US employment of adults is under 50% gotta find your market somewhere:

Work-wear maker Carhartt Inc. is courting hipsters with a free-standing store in Wicker Park, its first urban shop, as the 122-year-old blue-collar brand looks to broaden its appeal.

The Dearborn, Mich.-based company, best known for its cotton duck "Detroit" jackets and quilt-lined coveralls, is expanding into the fashion market after weathering the one-two punch of a housing crisis and recession that left its core customers — carpenters, plumbers and construction workers — scrambling for work.

Blue collar is getting retro. Especially in Illinois.
And isn't that a worry, among other things.
Obama is slated for Chicago today:

President Obama’s campaign manager Jim Messina said it is “baseless” that Obama wants to raise $1 billion for his re-election, with the comment coming as Obama hits Chicago today to launch a massive fund-raising drive for a second term.

“We’ll raise enough funds to compete and win, and that will take a significant amount given the vast amounts GOP-allied groups are already raising. But this pie-in-the-sky speculation about a billion dollars is baseless,” Messina said.