And we wonder why there are no jobs 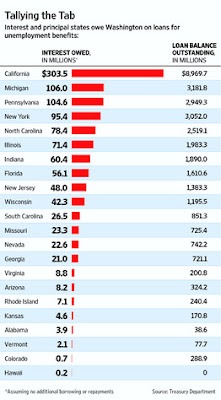 Is this your state?

When joblessness soared during the recession and anemic recovery, many states drained their unemployment funds and borrowed from Washington to cover their share of benefits. Now 27 states collectively owe almost $38 billion. More than $1 billion in interest on those loans is due Friday, when the federal government's fiscal year ends, and some states are relying on additional taxes to make the payments.
Many employers will face a second hit—higher federal taxes—if their states don't pay their loan balances by November. The increased unemployment-insurance levies, an added $21 per employee a year in roughly 22 states, go into effect in January. That increase will be even bigger for states that miss their interest payments.

Look at the top deadbeat states. California, the leftist paradise with Gov. Moonbeam at the helm. Michigan, (new GOP governor notwithstanding) basket case for eons as Detroit's been battered by greenie mandates and piggy unions. Pennsylvania, dominated by Philadelphia lawyers, New York is New York. So far we're hitting straight blue. North Carolina, whose Dem Gov. wants to suspend democracy and is under criminal investigation for campaign expense violations.

Then there's Illinois. What's going on around here. 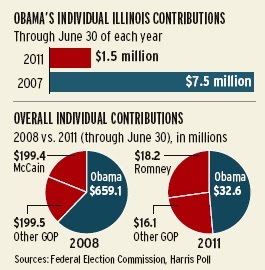 Every job needs an entrepreneur.

P.S. Via Morning Bell: Employers' health-care premiums increased 9 percent this year, according to a new survey. The cost of family coverage topped $15,000 for the first time.
WSJ Editors: Paul Ryan’s new health-care roadmap.
Posted by Anne at 9/28/2011 09:01:00 AM