he just seemed to shrink up into the chair


How that meeting turned…odd.  It became very-very odd.  And I know quite a few people walked out of that place feeling the exact same way.
Ulsterman:  Good – explain what was odd.  What happened?
Wall Street:  Others spoke – spoke to the president.  That was the format.  After the initial formal introductions.  They spoke, and he listened.  At least he appeared to listen.  For awhile.
Ulsterman:  Awhile?
Wall Street:  Yes – awhile.  There came a time when he seemed to lose focus.  You could see…it appeared the energy just left him.  Like he wasn’t the same person who had walked into the room just 30 or 40 minutes earlier.  He…President Obama, he just seemed to shrink up into the chair.  And he started to look down at his watch.  Repeatedly.  Eyes were starting to glance back and forth at each other – people communicating to one another what everyone was noticing – how the president, mentally, seemed to have “left the building”.  Well, now it was the president’s turn to speak.  To give some of his own input and reaction to what others had been saying. He didn’t stand up.  He didn’t even straighten up in his seat.  President Obama just turned to his left and said, “Valerie?”

Doesn't that shrinking remind you of this: 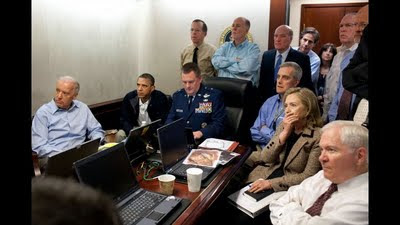 Then there's the description of his days in the White House. You decide.

...Valerie, Panetta, Bill Daley in the Oval, Bill Clinton at the podium...Bill... 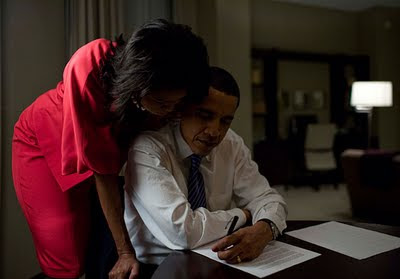 shrank into his chair

So finally, finally, finally, after over 2 1/2 years, someone has actually noticed that the Charlatan-In-Chief is an empty suit. This was SO apparent during the 2008 campaign to ANYONE who was paying attention. What a shame the MSM failed to do their job & failed to highlight his inadequacies. The damage being done by this administration of incompetents is incalculable, and much of the blame can be fairly laid at the media's feet.
OTOH, it certainly is entertaining to watch his presidency & the Democrat Party self-destruct. It's even more entertaining to listen to his supporters come up with ever-crazier defenses of his actions (or inactions, as the case may be).
Gotta try to find a bright spot somewhere.

ever-crazier. And we have months left to get through til Nov 2012.

Love me some Ulsterman, I hope that he is real.

The tone of the Insider . . .could it be Leo Panetta?

But I think maybe a longtime behind the scenes guy