Around the Bend of the Bean 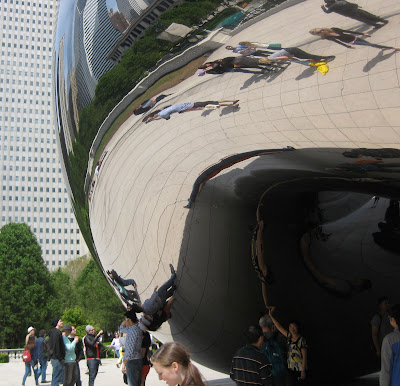 This morning we are treated to the view Inside the Secret Service Command Center. They are hanging out in the leafy burbs:

Many suburban departments are also contributing an officer each to a special team that can be activated in the event extra help is needed. When asked if he anticipated any trouble in the suburbs, a law enforcement official said "cops are like Boy Scouts. They always like to be prepared."

ABC7 is developing their own intel: Intelligence Report: Riot police blocks away from anti-NATO protests, out of view And we get an air show:

Friday morning, Air Force F-16s and other military jets will begin an exercise by NORAD, the North American Aerospace Defense Command. It is scheduled to start around 9 a.m. and last two hours.
During the NATO summit itself, F-16's will patrol the sky over Chicago to enforce a wide no-fly zone for the protection of heads of state and foreign ministers from 60 nations.

So far bikes rule, prevailing over the toy drone outside Obama HQ:


Tighe Barry stood in the middle of that line, holding two yard sticks connected to a cardboard model of a drone to protest drone strikes by the United States, which he said have killed hundreds of innocent people.

“Barack Obama, a Nobel Peace Prize-winning president, needs to come clean,” said Barry, from Washington, D.C. “He’s not for peace or for ending these outdated wars.”

The protesters then staged what they called a “die-in,” in which Barry made explosion noises and pretended to kill about a dozen of the demonstrators with his model drone, as he shouted: “Who are these people? They look like they’re doing something bad from 3,000 feet. Whoops, killed some innocent people. Oh well!”

Code Pink was there. On the ground, though holding fire. Perhaps fresh from the latest fundraiser.

But what I really wanna know is, Will Michelle Dress Down for Chicago NATO?  Perhaps pretty in pink.