Will Michelle Dress Down for Chicago NATO?

It's not an official Obama campaign directive, but the HQ looms over the city, not to mention City Hall. (Of course the Obama campaign doesn't need to make an effort to blend in.)

Given her pricey track record,


Even in trips to the third world, Mrs. Obama makes sure to dress first-class. On July 12, 2009, she wore a Sophie Theallet dress while visiting a hospital in Ghana. Similar Sophie Theallet dresses retail for $1,295 at Saks Fifth Avenue. The per capita GDP of Ghana is $3,100.

...and global perspective, I tend to think not. She's got the ladies to take about.

Well, she may leave off the bangles, but the last time she had a big gig like this was her precious farm tour in ballet flats. NY Times:


The first lady’s foreign guests had been advised to wear “farm-appropriate clothing.” Mrs. Obama, wearing a floral and foliage-patterned Tracy Feith dress that she also had worn to her first public event after President Obama’s inauguration, had on silver ballet flats. But not everyone complied: not the women in their five-inch heels, nor the ones in their special-occasion native costumes with elaborate headdresses.

I'm hoping for another photo-op. 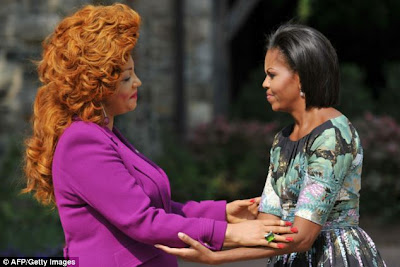 Sadly, Cameroon is not a member of NATO. But the new French presidentette's nickname is Rottweiller or something.

Don't tell Barack. (Don't tell Axelrod, for sure.) Don't even put it on a post-it.

P.S. But we could always #AskMichelle herself. Oh, and even when she's in her home town she'll stay in a hotel. I guess it's FLOTUS' idea of a staycation.