Get it wrong and your kids will be talking Australia emigration 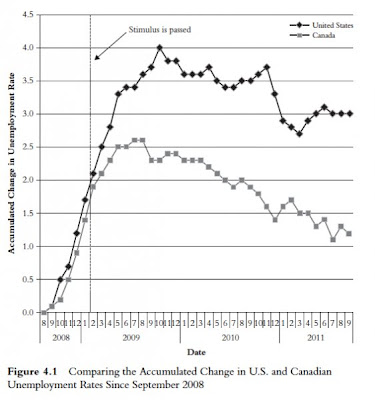 Start by comparing us to Oh, Canada, a country blessed by the absence of the Big O. The Obama Debacle, as told by Barack's former U of C colleague. Read it all, but we all know the stimulus crowded out the private sector kicking unemployment higher, killed real jobs and rewarded political cronies and public unions at a cost of trillions in debt.

Can we stipulate that profit is the best mechanism there is to measure and reward companies' responsiveness to consumer demand for useful and wanted products--if a company can't meet it, it goes out of business, and rightfully so. They have to compete on affordability as well. So it's a win-win for the consumer. Someone else steps up to fill the gap by doing a better job on all counts. Is losing money a virtue? I don't think so. Capitalism is inherently virtuous. Father Sirico has written another book to meet the challenge of the time: Defending the Free Market: The Moral Case for a Free Economy

And let's look to the lessons from Maggie the Iron Lady:


Get the growth choice right, and we'll be ok. Get it wrong and your kids will be talking Australia emigration.

Right now, with growth stuck below 2%, we're toast. With strong growth at 3% or better, there will be jobs. With long-term growth, Medicare, debt and the rest of the horribles that keep worrywarts awake at night are solvable. With strong growth, the U.S. will not have to cede world leadership prematurely to whichever Chinese functionary slugs his way to the top of their heap. With strong growth, your college graduate can move out of the house. With normal American growth, Europe may be irrelevant but it won't die, and a U.S. president won't look oddly small talking to the Vladimir Putins of the world.

Much as I love the Ozzies, I'm not ready to sing Waltzing Matilda yet as an oldie down under.

And as we approach the 4th of July and the celebration of the birth of this country, it's worth bringing up again the role of our Judeo-Christian tradition in ushering in a government of the people, by the people, for the people.

The birth of freedom.

Never take it for granted.

P.S. Heritage: What You Can Do to Promote Religious Freedom. Religious freedom is the cornerstone of the American experiment
Posted by Anne at 6/21/2012 08:07:00 AM