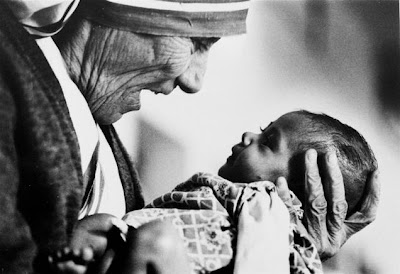 Our President Barack Obama and his nanny state would assault the religious freedom of a saint. And although many Americans are unaware of this battle for the spirit of America, they are coming to know:


Encouraging signs from a newly-released Knights of Columbus-Marist Poll:


“…the survey found that nearly three in four Americans (74 to 26 percent) say that freedom of religion should be protected, even if it conflicts with other laws. Majorities would also protect the First Amendment conscience rights of hospitals, health care workers and insurers. [snip]

“Strong majorities would let individual health care providers and organizations opt out of providing: abortion (58 to 38 percent), abortion-inducing drugs (51 to 44 percent), in vitro fertilization treatments that could result in the death of an embryo (52 to 41 percent), medication to speed the death of a terminally ill patient (55 to 41 percent) and birth control pills (51 to 46 percent).”

Who would deny the care of the poorest of the poor, an act of great humanity, can be suffused with great religious faith.

Related posts:  Notre Dame off the ObamaCare Reservation, Obama's Dog Days, Our graceful president, Why not mandate Starbucks next?, college and law school students who demand that priests and nuns finance their fornication deserve searing satirical treatment. This is the sorriest collection of arrogant snots in the history of academia, Schakowsky Struck Dumb, Drop it like a sock, Barack, I'm with Rush, You Boobs, Cardinal Dolan: Don't Impose the Unconscionable, A tax on the 1st amendment, and the 2nd, Can women be bought for 9 bucks?,  Then they came for the Catholic left, Chicago Media Has Pfleger Pfever; Ignore Bishops Rejection of HHS Mandate, she quoted me Burke, Does Obama want to eat Catholics for Breakfast?, Obama's Making Catholics Mad, NLRB Encroachment: Who are they to determine our Catholic identity?, Obama is Losing Catholics,  Suffer the Little Children
Posted by Anne at 5/23/2012 08:12:00 AM