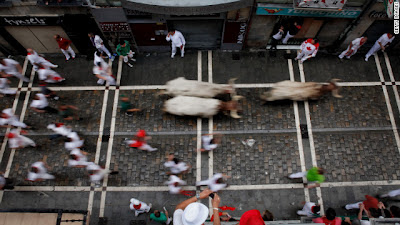 Heard this on CNBC the other day, the Mother of All Pensions in the bluest of blue states is a disaster. LA Times:


The nation's two biggest public pension funds reported meager returns for the last fiscal year, raising the prospects that state and local governments and school districts may have to contribute more toward their workers' retirements.

This is what Gov. Scott Walker foresaw and successfully fought to fix. They're on their way but not out of the woods yet. Other states in thrall to Big Union clout haven't even scratched the surface.

Most states use a discount rate of 8%. (Moody's is looking to shift to 5.5%) This is nuts, even if you were judging by the market returns on the assets, but the rate that should be used is the risk of the obligations:


As any individual who receives a passing grade in my finance courses should be able to explain, the appropriate discount rate to use when computing the present value of a stream of cash flows depends on the riskiness (generally defined as the correlation of those cash flows with the market) of those cash flows.  In the context of pensions, the discount rate depends on the risk of the pension payments to beneficiaries.  In many states – such as Illinois and California – there are strong constitutional protections in place that make already-accrued benefits risk free.  Thus, what Novy-Marx and Rauh do in their research is to apply basic finance principles to come up with a more accurate measure of pension liabilities than what one gets from using official government statistics.  Cate Long fell into the same trap that so many others have – including the Government Accounting Standards Board (about which I have previously blogged here and here) – of thinking that the right discount rate is a function of the risk of the assets, instead of the risk of the liabilities.  As a result, she – like GASB – completely ignores an enormous implicit put option that is being dumped onto taxpayers.  Her piece also contained other problems that are discussed Josh Rauh’s response.

Of course who really thinks the state of Illinois paying its bills is a risk-free bet? It's been stiffing vendors for years and that's barely budged, despite the horrendous tax increase we endured last year. Illinois has even been raiding funds earmarked for charity by taxpayers in good faith, not to mention the Bright Start college fund fiasco:


Illinois' prepaid tuition program, a 12-year-old financial plan enabling children to attend state colleges at today's prices when they have grown up, has the deepest shortfall of any such fund in the United States and is plowing money into unconventional — and some financial experts say high-risk — investments to close the gap. The deficit of the College Illinois Prepaid Tuition Program also is far larger than the fund is declaring. Administrators recently adopted new calculations that mask its size. The performance of the $1.1-billion fund is crucial to ensuring that the prepaid plan's nearly 55,000 family participants get what they have paid for. That's because, unlike in five other states, Illinois doesn't promise to bail out the fund if it runs short of cash, contrary to what even some savvy investors and financial planners think. Instead, state law requires only that the governor ask the Legislature for help if the program can't meet its commitments. Lawmakers are under no obligation to act.

Emphasis mine. Laugh or cry.

Northwestern Prof Rauh's paper in 2009  The Liabilities and Risks of State-Sponsored Pension Plans, I summarized from his table:


Table 1 shows pension underfunding for each of the 50 states relative to the
state’s total annual tax revenues and gross state product. Ohio faces the largest burden as a percent of total tax revenues. Its total tax revenues in 2007 were $24.8 billion and its total Accumulated Beneﬁt Obligation pension underfunding using our preferred measure of the risk-free Treasury rates for discounting is $216.9 billion ($332.5 􏰃 $115.6). At its current level of tax collection, Ohio would need to devote 8.75 years of tax revenue to pension funding simply to catch up on already-made promises. Of course, Ohio would need additional revenue to fund new beneﬁts that employees earned over that time period, and would need further tax revenue to run state programs other than its retirement systems.
The next four states on the list are Colorado, Rhode Island, Illinois, and Alabama. These states would need to devote 8.3, 7.7, 7.2, and 6.4 years of tax revenue respectively to close the pension gap on promises already accrued by workers.

It's worse now, of course. Here's another stab at the big picture today from State Budget Solutions:


According to standard actuarial accounting, the average public pension has fallen to around 75 percent in 2011, versus 103 percent in 2000. Annual Required Contributions to public pensions have more than doubled since 2001, though researchers at the Center for Retirement Research at Boston College project that state and local governments will meet only around 79 percent of required payments this year. Public sector pensions, as of mid-2011, were underfunded by around $885 billion, based on accounting rules established by the Governmental Accounting Standards Board applied to a large sample of plans from the Public Plans Database.
However, reports from academic economists and nonpartisan government agencies strongly suggest that the true state of public sector pension funding is far worse than suggested by official plan disclosures. The accounting rules followed by U.S. public sector pensions are more forgiving than those required for private sector pensions or public sector plans in other countries. So-called "fair market valuation" more fully reveals the value of public sector plan liabilities and shows that the average public employee pension plan in the United States is only around 41 percent funded while total unfunded liabilities as of 2011 are roughly $4.6 trillion.

I'm sure there's a specific update somewhere state by state but the point is no amount of risky investment bets will save these unsustainable pension promises. Unscrupulous, yes I call them unscrupulous ok stupid too states like Illinois run by public unions are lying to taxpayers and need to come clean.

Better the state essentially go bankrupt and bust these unconscionable contracts that hold our kids and our future hostage. Because otherwise garbage and rats will start accumulating on the streets as states can't pay for basic obligations while thousands are retired too early at too high a cost.