LaLaLa We can't hear you Barack 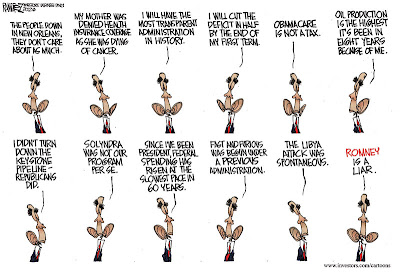 So Barack-O's out in la-la-land and, backed up with his teleprompter and a celebrity list, gets let me be clear brilliant:


"After the debate I had a bunch of people come to me -- 'Don’t be so polite, don't be so nice,'" he said before several thousand supporters at a second fundraising event. "But I want everybody to understand something. What was being presented wasn’t leadership. That's salesmanship."

That's spin. Your spin. Isn't it Barack. Because all you do is sell yourself (and us). You just spout talking points, you don't engage with Congress, you can't even debate. Now most of America knows.

Political gadfly Andrew Sullivan is beside himself after the latest Pew poll which show Romney's favorables higher now than The One's, Romney even with the Barackstar with women, and Romney tied with Preezie on who can help the middle class.

And can we talk? Barack Obama is not a polite guy. He's been a nasty phony... The Barackstar Bites the Dust. Back Story Bust. 2

...from way back. Thomas Sowell on our Phony in Chief, speaking to a largely black audience in June, 2007, in an phony urban accent we've never heard before or since from him (but who knows, as the PC media were there but essentially didn't cover it, they covered it up):


If you want to know what community organizers do, this is it -- rub people's emotions raw to hype their resentments. And this was Barack Obama in his old community organizer role, a role that should have warned those who thought that he was someone who would bring us together, when he was all too well practiced in the arts of polarizing us apart.

Why is the date of this speech important? Because, less than two weeks earlier, on May 24, 2007, the United States Senate had in fact voted 80-14 to waive the Stafford Act requirement for New Orleans, as it had waived that requirement for New York and Florida. More federal money was spent rebuilding New Orleans than was spent in New York after 9/11 and in Florida after hurricane Andrew, combined.

Truth is not a job requirement for a community organizer.

And he actually voted against the waiver. We're through being organized to death, Barack. It's not working. Not even in Chicago.  We've got some new hope on the horizon, with substance and true leadership.

We can't hear you anymore Barack-O.