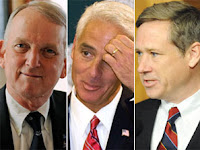 The Politico calls it a "nightmare scenario". We shall see. Conservative Eric Wallace has withdrawn for the Senate in Illinois, so conservative support should coalesce around anti-tax Patrick Hughes. ( A bit of a rookie politically) NBC5Chicago:

Hughes is currently the Chairman of Sensible Taxpayers Opposed to Increased Taxes. STOP-IT is a committee whose mission is to prevent any increase in the state income tax, cut wasteful spending and lessen the impact of special interests in Springfield. They are responsible for lobbying for fiscal responsibility and restraint in state government. According to his campaign site, "Pat was credited by state party leaders, including House Minority Leader Tom Cross and State Senator Kirk Dillard, with playing a major role in defeating Governor Pat Quinn’s proposed 50% income tax increase on Illinois taxpayers."

Kirk got in trouble because he voted for cap and tax. Yes, it was a massive tax under cover of a feel good greenie lalaland bill--with corporate and crony subsidies. (Note Al Gore's greedy gambit finally exposed in the NY Times.)

To his credit he is at least listening now, and says he won't vote for it again in the Senate. And he has blasted SEIU/ACORN.

Fiscal issues, jobs and the economy predominate this year and barring any miraculous recovery, will continue well into 2010. The conservative mood of the country is on the march. Match it or fall by the wayside.