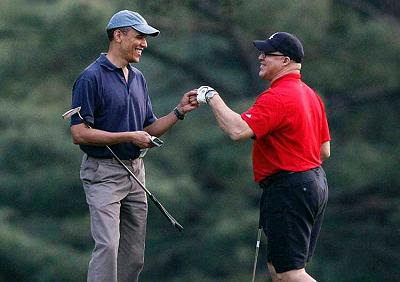 So we have a situation where then Illinois state Sen. Barack Obama recommends a friend to his fundraising and house fairy Tony Rezko, who's acting as a "consultant" to Gov. Blago (the now impeached and indicted)

Tony Rezko, not officially on the payroll. Obama's friend gets the job, which is charged with handing out funds to "non-profits", one of which was newly started and run by a state Rep. (Of course, who else could do the job so well) Now lots of taxpayer money is apparently missing and the Feds have launched a probe.

Hence the subpoena. As observers have noted, Whitaker was last seen on the links with our President Barack Obama. Previously Barack's spouse Michelle also worked with Whitaker.

It is any wonder Illinois is broke? The whole state operates like one big patronage system and cycles our money back to elect these grasping and incompetent people.

There's also this part of the story, outlined back in 2008:

Whitaker's agency also got caught up in scandal. He oversaw the budget of the Illinois Health Facilities Planning Board, which approves medical construction projects. Rezko and his associates controlled that board, which they used to solicit kickbacks and payoffs, according to testimony at Rezko's trial.

Rezko was convicted. Whitaker, who said he wasn't involved in the board's day-to-day operations, was never accused of any wrongdoing.

"During my time as director of IDPH, I received four or five calls from Tony Rezko seeking my support for and attendance at the St. Jude's Children's Hospital charity event,'' Whitaker said. "After my employment interview, I never had a conversation with Mr. Rezko about the" health department or the planning board.

Our President Barack Obama had an interest in that board too. Oh, and Susan Sher, quoted as counsel in the article, works for Michelle now as her chief of staff. And as we know, Valerie Jarrett, slumlord, helps out The One.

None of this may be illegal, it may not even be unethical, but it sure stinks.

In other news, another prominent Chicago suicide.

...Just a reminder, the judge in the Blago trial has ruled the president doesn't have to testify, but reserves the right to change his mind if further evidence is presented. And Rahmbo hasn't been subpoenaed yet.

Related posts: Does our President Barack Obama Parse His Words? , Blago Wants to Bar Rezko, Levine, The Mystery of the Missing Tony Rezko