The Obama Blago Lie is Unraveling 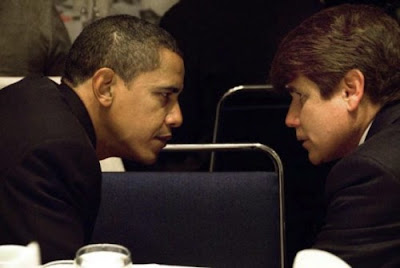 The picture could have been taken before, but the questions about a meeting between Obama and Blago remain. Big Journalism. That question is connected to another big one--the direct contradiction by SEIU Illinois leader Tom Balanoff of the President's contention that he had no contact or communication with the Blago people on the Senate seat. Apparently in Obama's mind communicating through Balanoff was not communicating.

Will the media ask them? The subject came up at the White House press briefing. (Was that Ann Compton of ABC Radio, who hails from suburban Chicago New Trier) Time, the Politico and Morning Joe have noticed.

The Obama Greg Craig whitewash report has been questionable from the get-go, and looks very questionable now:

Transition aides said it wasn't until after Nov. 12 that Emanuel, a North Side congressman with close ties to Blagojevich, and Obama talked about a preferred list of Senate candidates, and the president-elect authorized Emanuel to relay it to the Illinois governor's office.

Balanoff says the president called him on the day before the election, Nov. 3rd to say Jarrett was his choice and convey it to Blago. And are we really to believe that the president wouldn't have discussed this with Rahmbo at that time? And that Rahmbo would have called Blago without the president's knowledge to recommend Jarrett between Nov. 6-9th? In addition to that, Jarrett withdrew on Nov. 9th. What prompted that? And what about this:

Obama also said "he had no interest in dictating the result of the selection process and he would not do so, either directly or indirectly through staff or others," the report said, adding that Whitaker relayed that information to Peters.

Balanoff's evidence is key, and contradicts the president. He's under oath.

Will the president eventually have to testify?

And it's not just Balanoff. Blago's chief of staff John Harris opens the door to raising questions about what Obama knew and when did he know it. Did he meet or phone Blago directly, and did he cover that up through the Craig report. Did he lie to the FBI?

That's what got Nixon impeached, the cover-up, not the Watergate break-in itself. I've always wondered whether U.S. Attorney Patrick Fitzgerald pulled the plug on the investigation before the White House could get really embroiled in this--and did he give them a heads up that Blago was on tape--recall Jarrett's abrupt withdrawal from consideration for the Senate seat. (See this.)

So far the judge in the Blago trial has brushed back attempts by the defense to bring Obama into the trial--but once Blago gets on the stand himself--all bets are off.

6. Obama had a secret phone call with Blagojevich
Redacted portion: President-elect Obama also spoke to Governor Blagojevich on December 1, 2008 in Philadelphia. On Harris Cell Phone Call # 139, John Harris and Governor’s legal counsel discuss a conversation Blagojevich had with President-elect Obama. The government claims a conspiracy existed from October 22, 2008 continuing through December 9, 2008.6 That conversation is relevant to the defense of the government’s theory of an ongoing conspiracy. Only Rod Blagojevich and President Obama can testify to the contents of that conversation. The defense is allowed to present evidence that corroborates the defendant’s testimony.

Of course, in Obama's favor, Blago is not a very credible witness. But whatever the outcome, Blago and Obama are joined at the hip through Tony Rezko. This shines a light on the stinking underbelly of the Chicago Way and it's a BFD.