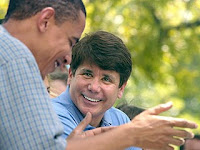 Plus--major screw-up--the paper copy was redacted but the online one was retrievable. Here it is.

I haven't read it all yet. Background:

Governor Alien and Other Stories

A Blago Critic? :
UPDATE: It's pretty amusing Blago's lawyer is using the Obama whitewash, uh report to claim his client is blameless. Latest claims here, in front of the Illinois House impeachment proceedings. Live video here. The Sun Times looks at the timeline--to me, this raises more questions about Jarrett and Obama, with the SEIU's Balanoff in the middle. Blago supposedly "back at work".

How confusing, the earlier labels were Senate candidates in numbers, No. 2 was viewed as Lisa Madigan, Illinois AG but you'd have to think B in this case was Jesse Jackson Jr. And is the SEIU official Tom Balanoff in Illinois or Andy Stern himself, who just resigned?

More. Here is the Tribune story which looked at the timeline:

The report revealed that Obama, Emanuel and Valerie Jarrett, a top adviser to Obama, were all questioned last week by federal prosecutors as part of the ongoing investigation that led to the Dec. 9 arrests of Blagojevich and his chief of staff, John Harris.

Federal agents had tapped the phones of both Blagojevich and Harris. During Emanuel's meeting with prosecutors, he listened to undercover recordings of his conversations on those wiretaps, said Robert Gibbs, the incoming White House press secretary.

Emanuel has declined to speak to reporters about his role in the Senate succession and left for a vacation in Africa before the report's release.

In a conference call with reporters, Craig characterized Emanuel's conversations with Blagojevich as "completely innocent" and "completely appropriate."

Read on for the inconsistencies they noted.

P.S. Is someone obstructing justice?

More. Here's The Telegraph piece on the questioning of Obama the Blago team cites in the subpoena.

More. From reading this it looks like Valerie Jarrett was probably Senate Candidate B. From an old post, she's tied to the labor people:

P.S. And let's not forget Valerie Jarrett, Senate candidate No. 1 who suddenly pulled herself out of consideration. From my earlier post:

The transition hasn't yet responded to questions about Rod Blagojevich's indictment, but the key question is whether the transition was talking to prosecutors, whether Obama and Valerie Jarrett knew that Blagojevich had offered her the Senate seat in exchange for a labor job, and how she, the transition, or SEIU handled the solicitation of a bribe. (The existence of a transcript suggests that the SEIU official -- Andy Stern, the president, had met with Blagojevich just before the election on the subject, though nobody is identified in the complaint -- was wearing a wire.)

One piece of speculation: Jarrett's abrupt withdrawal from consideration for the Senate seat suggests Obama's circle aware of the investigation.

It is clear from the complaint that Obama refused to offer Blagojevich anything for appointing Jarrett.

"ROD BLAGOJEVICH said he knows that the President-elect wants Senate Candidate 1 for the Senate seat but 'they’re not willing to give me anything except appreciation. F*** them,'" says the complaint.

Valerie Jarrett, another Chicago Way player. From this post:

More. From the subpoena, it sure sounds like Andy Stern was involved, who was the most frequent visitor to the White House. It seems odd Obama would call a lower level official and not Stern--if he were going to make such a phone call, but then I'm not a pol like Barack. Maybe he thought he had plausible deniability:

Did Andy Stern throw Obama under the bus?

More. Rezko mentioned in a big way in relation to the Obama House deal, and in conjunction with some casino deals. Wow! Then Blago's legal team goes on to cite all the times presidents were compelled to testify.

21. Tony Rezko is one of the government's main witnesses.8 Mr. Rezko's credibility is
extremely relevant in this trial. In many instances, Mr. Rezko is the government's
crucial witness to prove up their allegations.9 Mr. Rezko wrote a letter to a federal
judge stating "the prosecutors have been overzealous in pursuing a crime that never
happened. They are pressuring me to tell them the "wrong" things that I supposedly
know about Governor Blagojevich and Senator Obama. I have never been a party to
any wrongdoing that involved the Governor or the Senator. I will never fabricate lies
about anyone else for selfish purposes." (Exhibit A)
22. However, the defense has a good faith belief that Mr. Rezko, President Obama's
former friend, fund-raiser, and neighbor told the FBI and the United States Attorneys
a different story about President Obama. In a recent in camera proceeding, the
government tendered a three paragraph letter indicating that Rezko "has stated
in interviews with the government that he engaged in election law violations by
personally contributing a large sum of cash to the campaign of a public official
who is not Rod Blagojevich. ... Further, the public official denies being aware of
cash contributions to his campaign by Rezko or others and denies having
conversations with Rezko related to cash contributions. ... Rezko has also stated
in interviews with the government that he believed he transmitted a quid pro quo
offer from a lobbyist to the public official, whereby the lobbyist would hold a
fundraiser for the official in exchange for favorable official action, but that the...

No wonder Rezko is being kept under wraps.You have to wonder if the prosecutors would like to hide too. Not to mention maybe the president. Rahmbo, and Valerie.

6. Obama had a secret phone call with Blagojevich

Anne- Very nice job of piecing the Blago story together. You're the only source I've seen that connects Andy Stern with Paragraph 9 of the subpoena, and I find very, very interesting your speculation about Stern, Obama, and buses. But what would be the motive? And does anybody know the whereabouts of the former SEIU president, though? And what about Patrick Fitzgerald? I haven't heard a thing about him.