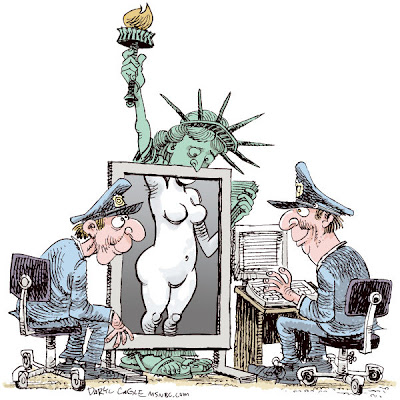 I don't know about you but I'm sick of the government. Naked scans or hands on our privates and in our wallets. You know they're going to want to tax us to the max rather than cut spending. It will never be enough.

Oh, and the Dems in Illinois want to put casinos everywhere so the state can profit--a dubious prospect.

Even at the airport. Who needs a cartoon.

And they'll probably try to put through a regressive tax on people who just want a cigarette or a coke. More destructive foolishness. They'll drive revenue and jobs and people who can leave out of a bankrupt state like Illinois. I live in Illinois and I say let the state go bankrupt. Then maybe we can restructure sensibly instead of paying through the nose for government unions.

And how does the government necessarily know what's good for us anyway.

Leave the "vice" in the private sector please.

And concentrate on the bad guys.

Good to know I'm not alone.

I still can't believe some of this stuff.

But I guess we should know what these leftists are capable of by now.

I worry for America because I love her.

Re TSA crap? AGAINST the 4th amendment in the constitution:

The right of the people to be secure in their persons, houses, papers, and effects, against unreasonable searches and seizures, shall not be violated, and no Warrants shall issue, but upon probable cause, supported by Oath or affirmation, and particularly describing the place to be searched, and the persons or things to be seized.

Cheers Lisa! Great to hear from you.

Fabulous rant! I'm sick of it, too, and I'm especially sick of waking up every day to some new avalanche of horrors pouring out of this admin or as the direct result of the incompetence of this admin (NoKo attacking SoKo would not happen if we had even a half-competent CIC). Grr. Sorry, am getting a bit ranty myself. heh

You are right about it all. I was just thinking the other day we got the Russians invading Afghanistan during the Carter administration.

What next with these malicious incompetanos.