Her true job is to make Obama feel proud of himself 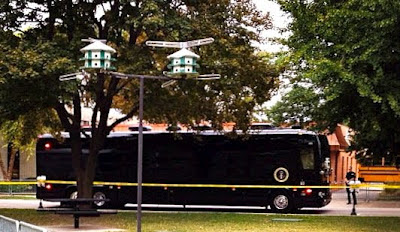 No, not Me-chelle, only recently proud of her country. Valerie.


President Obama canceled the operation to kill Osama bin Laden three times before saying yes, because he got cold feet about the possible political harm to himself if the mission failed.  Instead of listening to advisors from the U.S. military, Defense, or even State, Obama was acting on the advice of White House politico and close friend Valerie Jarrett.  Valerie Jarrett? [snip] Her true job is to make Obama feel proud of himself.  When Obama looks at Jarrett, he sees himself as whole and good and real.  He is no longer the fake black,

Comments:This is a good article that really defines why Obama needs Jarrett so much. All Obama's biggest mistakes can be tied directly to Ms. Valerie. I couldn't post all the pathetic stuff, so read the article. It's really sad that at his age he can't be his own man.

He really is a pathetic, isolated figure, who can't even eat fried twinkies. Maybe Valerie slips 'em to him.

P.S. Honey Blonde Ale on the Vader bus? Michelle on board tomorrow after glitzing around in Hollywood. I'm sure she's thrilled.