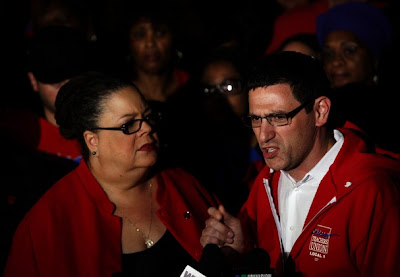 If pilot evaluation program at Chicago Public Schools is implemented system-wide, according to CTU second in command Jesse Sharkey on with 890am Don and Roma. This is what the teachers are objecting to, after also rejecting the merit pay concept.

Chicago Public High School graduation rate is 56%. That's a 44% failure rate. Maybe it has something to do with BAD TEACHERS.

In spite of the city being broke, taxing to the max already, draining all school reserves to put $ on the table, teachers already making more than double on average than parents, not including benefits, the teachers union decided to strike.

Chicago had the shortest school day of any major system with the highest salaries, higher than NYC, and a HORRENDOUS FAILURE RATE.

They're on the picket line. Charter schools will be open. As are Catholic schools. Naturally.


Even late on Sunday night, as Chicago School Board President David Vitale tried to reach Lewis, the union president did not respond to his cellphone text. Lewis says she didn’t see it as she worked the phones with national labor leaders.

...The teachers union turned down a pretty rich offer of a 16% pay raise over 4 years. Striking on evaluation and recall the mayor maintains is an illegal strike of choice.
Stay tuned. Will Rahmbo lay the hammer down?