raps punctuated by the sound of gun shots


Tuesday was another night, another homicide in a year in which hundreds of Chicagoans have been gunned down; the murder rate for the year’s first half is up an alarming 38 percent over last year. This time the victim was Joseph Coleman (18-year-old rapper Lil Jojo). The bicycle-riding teen was slain by a drive-by shooter in his South Side Englewood neighborhood.

His death starkly punctuated a gang-related war of words and music between Jojo and rapper Lil Reese, associated with the biggest new star in Chicago hip-hop, Chief Keef. Jojo recently released a song on-line, “3hunna K” that mocked Reese, Keef and their “300 squad,” which is associated with a street gang.

Keef took to his Twitter account Wednesday to respond to Jojo’s death: “It’s sad cus … Jojo wanted to be just like us #LMAO” (Internet slang for “laughing my ass off"). Chicago police are reportedly investigating a possible connection between the comments and Jojo’s death.

Maybe Michelle will invite this guy to the White House too. Another workshop. For schoolchildren.

Without a profound respect for life there is no liberty.

So the Trib thinks this obscenity is cool, especially for kids

That's the message of this fluffy dismissal. What did the Trib leave out of the lyrics they quoted. Right up front in your face:Use your mind and nine-power, get the government touch

Them boys chat-chat on how him pop gun
I got the black strap to make the cops run
They watching me, I’m watching them
Them dick boys got a lock of cock in them
My people on the block got a lot of pok* in them
and when we roll together
we be rocking them to sleep
They make the case by editing this out they think it's inappropriate and thuggish too, not to mention obscene. And this guy's going to conduct workshops for kids, in the White House.

At a White House event, a showcase for culture.

Family of murdered Fenger student watches as fourth defendant is convicted: Peeteey at 9:56 PM May 10, 2011

Aww, but Eugene was just beginning to turn his life around. He was going to be a rapper! 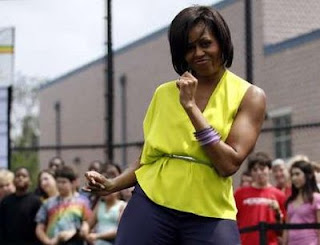 
For New Jersey police, the outrage centers on "A Song for Assata" lyrics like "Your power and pride is beautiful. May God bless your soul."
Shakur, formerly known as Joanne Chesimard, was convicted for the 1973 slaying of Trooper Werner Foerster on the New Jersey Turnpike. She escaped prison in 1979, and is living in asylum in Cuba.
"The young people who read this stuff, hear this stuff, are getting a very dangerous and deadly message," said David Jones, president of the State Troopers Fraternal Association union.

I  have no issue with the First Lady adopting a cause dear to her heart. That's fine. I would have loved it if she had at least nudged the unions on school choice but she and Barack didn't send their kids to public schools in Chicago either. But the cause she did adopt rubbed salt in the wound--spending billions on fitness and nutrition as if that's the biggest risk kids in inner cities face these days.

Now she has turned that into a destructive message by her praising Beyonce and supporting abusive culture with this rapper invitation.