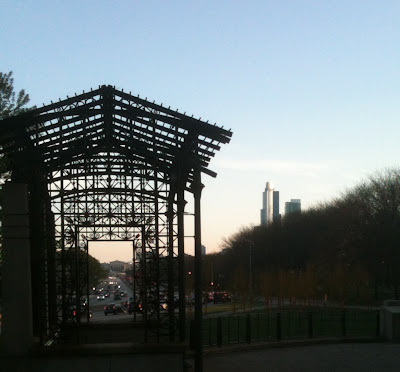 Yes, let's let people eat chicken in peace, but what's the takeaway. Via Pat Hickey, Cardinal George schools us all:


Responses to my reflections last week on “Chicago values” fell into two camps.  There were almost universal plaudits for recognizing that the government should be concerned about actions and not about thoughts and values.  The media, of course, are in this camp, because they are concerned about the free speech that is at the heart of their profession.

More complicated, on the other hand, was the reaction to the “value” that was the case in point: same-sex “marriage.”  Some who are comfortably in the first camp deserted the field of argument on gay marriage.  An argument is always made in a context that determines what can be considered sensible, and it seems to me that some of us are arguing out of different contexts.

There are three contexts for discussing “gay marriage”: 1) the arena of individual rights and their protection in civil law, 2) the field of activities defined by nature and its laws, and 3) the realm of faith as a response to God’s self-revelation in history.  Unfortunately, when the only permissible context for discussing public values is that of individual rights protected by civil law, then it is the government alone that determines how it is acceptable to act.  Every public actor (including faith communities) then becomes the government’s agent.  This is a formula for tyranny.

Read it all, because, as the good Cardinal points out, there are other spheres beyond the political. That is why our founders and pioneers came to this country after all. If we forget our traditions of freedom we lose our precious liberty.

Without a profound respect for life there is no liberty. It's as simple as that.

And a pursuit of happiness that is blind to profound wrongs is barbaric.

Whether motivated by a cry of conscience or faith, if we fail to speak out to defend innocent life, and the institution of marriage that nurtures it, America will fail.

A smaller government is not only a fiscal imperative, it's a moral one, in Chicago and around the country.

We need to recover the wisdom of civil society and the private sphere.