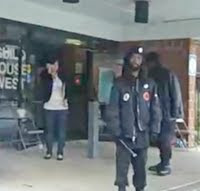 Who approved the reversal of career Justice lawyers' recommendations in the case of the Black Panther voter intimidation back in November--remember, it was caught on tape. Now we know-- Washington Times, "No. 3 at Justice OK'd Panther reversal".

Who has politicized the Justice Dept.?:

While the Obama administration has vowed a new era of openness, department officials have refused to answer questions from Republican members of Congress on why the case was dismissed, claiming the information was "privileged, according to congressional correspondence with the department.

Rep. Frank R. Wolf, Virginia Republican and a senior member of the House Appropriations Committee who has raised questions about the case, said he also was prevented from interviewing the front-line lawyers who brought the charges.

"Why am I being prevented from meeting with the trial team on this case? Mr. Wolf asked. "There are many questions that need to be answered. This whole thing just stinks to high heaven."

Why was the case dropped? Here are the initial grounds:

"We believe the deployment of uniformed members of a well-known group with an extremely hostile racial agenda, combined with the brandishing of a weapon at the entrance to a polling place, constitutes a violation of Section 11(b) of the Voting Rights Act which prohibits types of intimidation, threats and coercion, the memo said.

You know, Republicans have been accused of voter intimidation by just politely asking that photo IDs be required by law at the polls, a matter of common sense to most Americans. But then who is surprised at the double standard.

Welcome to Obama's America--where Black Panthers wield nightsticks without consequences and the U.S. of A-CORN prevails.

P.S. Malik Zulu Shabazz. In his own words, according to the ADL…

Oh, and in other news--Revenge of the ‘Shoe Bomber’: The terrorist sues to resume his jihad from prison. The Obama administration caves in:

Last May at the National Archives, President Barack Obama warned that “more mistakes would occur” if Congress continued to politicize terrorist detention policy and the closure of Guantanamo Bay. “[I]f we refuse to deal with those issues today,” he predicted, “then I guarantee you, they will be an albatross around our efforts to combat terrorism in the future.”

On June 17, at the Administrative Maximum (ADX) penitentiary in Florence, Colo., one of those albatrosses, inmate number 24079-038, began his day with a whole new range of possibilities. Eight days earlier, the U.S. Attorney’s office in Denver filed notice in federal court that the Special Administrative Measures (SAMs) which applied to that prisoner—Richard C. Reid, a.k.a. the “Shoe Bomber”—were being allowed to expire. SAMs are security directives, renewable yearly, issued by the attorney general when “there is a substantial risk that a prisoner’s communications, correspondence or contacts with persons could result in death or serious bodily injury” to others.

Reid was arrested in 2001 for attempting to blow up American Airlines Flight 63 from Paris to Miami with 197 passengers and crew on board. Why had Attorney General Eric Holder decided not to renew his security measures, kept in place since 2002?

According to court documents filed in a 2007 civil lawsuit against the government, Reid claimed that SAMs violated his First Amendment right of free speech and free exercise of religion.