Rezko, Alexi, Blago and the family*SEIU 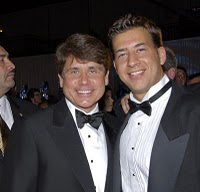 According to his official calendar, Rod Blagojevich met with SEIU President Andy Stern and SEIU Illinois President Tom Balanoff on November 3, 2008, the day before Barack Obama was elected President and about the same time, according to federal investigators, that Blagojevich was scheming to sell Obama’s Senate seat. Stern has refused to divulge what he discussed with Blagojevich that day.[4]

***
Rezko's cash used to renovate Blagojevich home, feds say. And this on the bleepin Golden seat:

As far as the pursuit of Obama’s Senate seat, prosecutors portray a Blagojevich who almost obsessively discussed cutting a deal to personally benefit from appointing Jarrett.

The crooked drama goes on, with the winner of the Dem Senate primary one Alexi Giannoulias-- earlier elected Illinois State Treasurer with the backing of Barack Obama, on the strength of his banking experience. The Giannoulias family Broadway Bank had Rezko as a customer, as well as a few mobsters. The bank, by the way, is about to go bust.

(Um, you might also recall Rezko helped our President Barack Obama afford his house too.)

Alexi wants to be on the Senate Banking Committee. Really? Good grief. Rep. Mark Kirk was on Don and Roma this morning. Audio.

P.S. I don't know about you, but I am getting really sick of SEIU. Here, here, here. And Tom Balanoff. Also here, here, here. Kind of reminds people of lots of shady, mucky stuff--Blago, SEIU, ACORN, Rezko...FOBarack Obama.

Lots of links in that paragraph. Will some other shoes drop? Here's a Sun Times timeline. And the RNC summary of the White House SEIU ties after the scandal broke. The White House (actually they were elected but not yet in the White House) whitewashed themselves back then, doing their own investigation. We'll see if it sticks. Cuz we know how transparent they are.

More. I am reminded of this earlier post on how Blago's mortgage was paid.