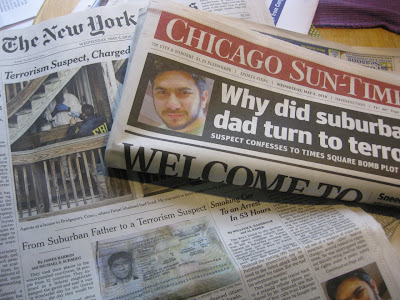 Who knew? Lurking behind the BBQ just your ordinary unhinged SUV owner liable to blow up tourists in Times Square any time. Just a random spark could set him off. It could be anything.

NY Times: From Suburban Father to a Terrorism Suspect

So the next time you see the Weber drummers marching with the kazoo band in the Evanston 4th of July Parade, BEWARE.

More. Even though he's a "citizen", he could still be charged as an enemy combatant.

Related: Another Imbecilic Katie Couric Interview, That hapless Janet Napolitano, A Colorado Terror Connection, Bomber Caught Trying to Fly Out
Posted by Anne at 5/05/2010 08:02:00 AM

I must be crazy, because when I hear the term "suburban dad," I think of a guy who actually lives with his children in that suburb (and I'd like it to be a distinct entity, too, not just something on the other side of a dotted line on a map.

But then, what can you expect from a conservative?