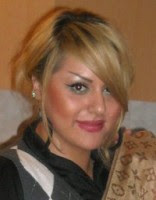 The Iranian dress code in action. She was 26.

According to the reports, Basij forces stopped Babazadeh in her car for not following the Iranian regime’s dress code. Elnaz resisted the forces and ignored orders given by the Basij forces.

Then the Basij forces who had initially stopped her jumped into her car and threatened her with a gun. Two other Basij members joined in and all together they beat and raped her. They murdered Babazadeh and dumped her body close to Emamiyeh cemetery.

After local investigation was conducted by HRANA members in Tabriz, it was confirmed at Babazadeh’s funeral that the person who killed her was the son of a high-ranking Revolutionary Guards member.

Well, what will the Obama administration have to say about this. Here were their remarks after Iran was "elected" to the UN Women's Commission:

"You don't have women placed in head-to-toe burkas in that country," the official said. "You have women elected to the legislature in the country."

The official acknowledged the death Neda Agha-Soltan, an Iranian woman who was killed during a post election anti-government protest.

"She was killed because she was a protestor, not because she was a woman," the official said. "I'm not saying we can take Iran and compare them to the human rights record of any country in the developed world. But in that region, women in Iran have a greater opportunity for education, for business and to participate in politics."

What are their excuses for a murderous regime this time? Was Elnaz a protester or a woman?

Will Code Pink protest her death? In Iran?

My last post on Iran was about the shockingly blunt statement by the UAE ambassador at the PC Aspen Ideas Festival of the need to bomb Iran's nuclear facilites: 'We cannot live with a nuclear Iran."

This is the thing about Iran, it's both laughable and hideous.

Who wants to live in a world where a laugh, or a love, could cost you your life.

Now it's allowing a strand of hair to be seen in public, or wearing nail polish.

P.S. Another woman on the hit list. This time in America. And Pam Geller at Atlas Shrugs: Raping their people to death is a popular tool of Iranian law enforcement.
Posted by Anne at 7/12/2010 03:32:00 PM