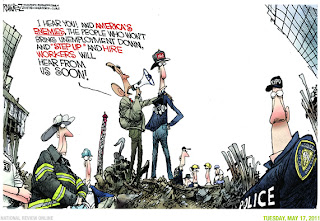 
Other common waiver recipients were labor union chapters, large corporations, financial firms and local governments. But Pelosi’s district’s waivers are the first major examples of luxurious, gourmet restaurants and hotels getting a year-long pass from Obamacare.

Is Chicago next? Perhaps the Topolobampo?

P.S. Can we have some more scrutiny on campaign shakedowns uh donations this round please MSM? Any at all would be an improvement. Newsalert: Unbeknownst to the Media, Tony Rezko May Have Had Financial Ties to Barack Obama

It's the Bolshie Chicago Mob in the White House.

On my blog, I wrote about something similar- I went through all the private companies and searched who their CEO's were donating money to, and found a lot of it was going to Obama!
http://aconservativeteacher.blogspot.com/2011/03/evidence-that-obamacare-waivers-are.html

None of this comes as a surprise but the lack of principle by those who forced Obamacare on the nation always needs to have the light shone it.

Keep pointing it out. Someone, somewhere, might wake up.

Thanks for your efforts and comments!