Does everything have to be round with this administration? 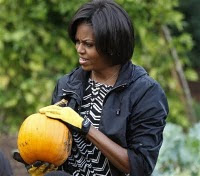 We had the stimulus logo, the ObamaCare logo, the missile defense logo and the new Dem logo. A womb to the tomb prison ring.

Wanna bet the new official foodie logo will look something like this.

Another way to hide the ball. Behind another one.

Pix of FLOTUS at Obama Foodarama:


First Lady Michelle Obama will host the annual Spring Harvest of her Kitchen Garden on Friday, June 3rd, in the late afternoon. In honor of last week's launch of Let's Move In Indian Country, Mrs. Obama will be joined by American Indian children. The new sub-initiative is designed to encourage American Indian and Native Alaskan communities to combat childhood obesity while using their own cultural traditions...

You can try to hide the ball.

P.S. The NY Times is worried:


Some who have seen the logo compared it with a pie chart, though dessert is hardly the association that the administration would like to conjure up. Others likened it to a pizza cut into slices (equally unpalatable for officials). One person said it called to mind a painting by the artist Mark Rothko, who was known for canvases with blocks of color. Those who had seen it would speak only on the condition of anonymity because they were not authorized by the administration to discuss it.

Yup, they may have a messaging problem. ...If it's not the pie, it's the golf. ball.