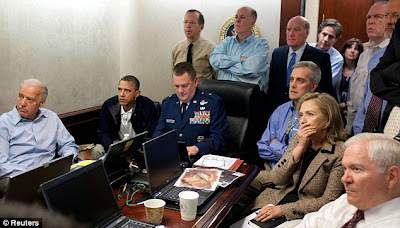 This is of a piece with the rumored WH Insider narrative, which suggested the president dithered over the decision and distanced himself:


Mr Pfarrer says the President's role was largely inflated and suggests he stayed out on the golf course for so long so he could distance himself in case it went wrong. Mr Pfarrer writes: 'If this had completely gone south, he was in a position to disavow.' He says the White House photographs did not show the moment that Bin Laden was killed, but the moment a helicopter went down, which happened after the shooting.